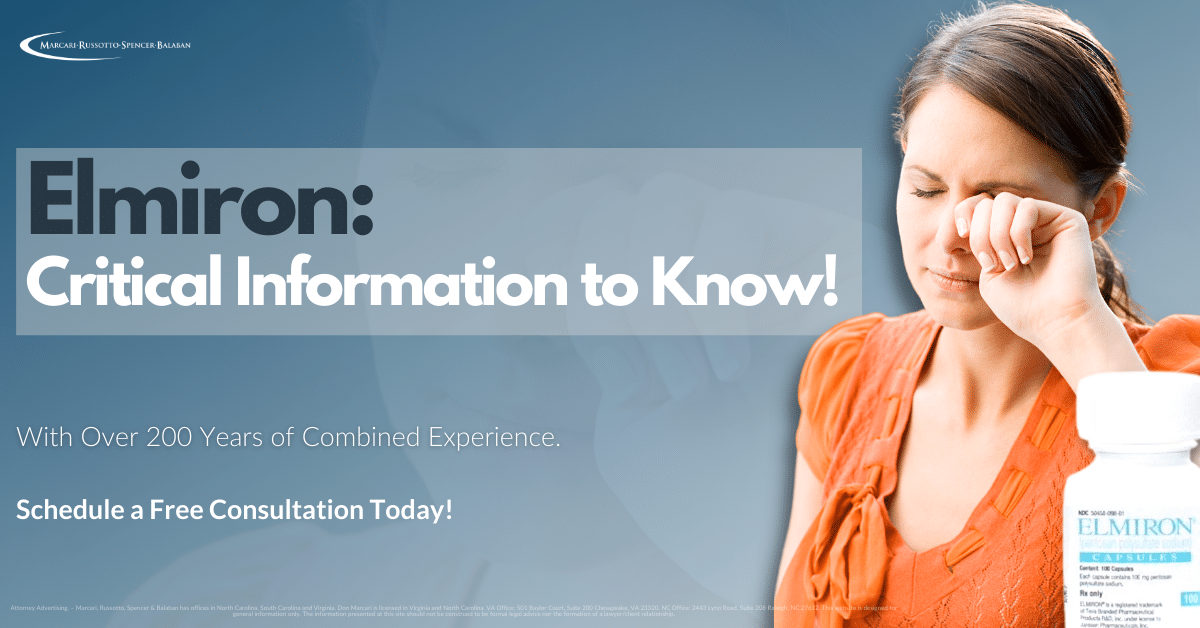 Elmiron, the brand name for pentosan polysulfate sodium (PPS) which is commonly used to help treat interstitial cystitis (IC) – a chronic and sadly incurable bladder condition, one in which primarily affects women, has been found to cause mild-to-severe pain & pressure within the bladder itself. It’s estimated that roughly one million Americans suffer from interstitial cystitis.

Those who have interstitial cystitis are all too familiar with the fact that it’s like having a bladder infection that will never go away.

What’s even worse is it can lead to lower urinary tract infections and symptoms, as well as frequent pain during sex.

At this time, Elmiron is the only drug that the FDA has approved to specifically treat this, although there are other known medications and treatments available.

The manufacturer of Elmiron, Janssen Pharmaceuticals, a subsidiary of Johnson & Johnson, interstitial cystitis is believed to be caused by damage to the lining of the bladder itself. In short, painful symptoms occur because certain substances within the urine irritate those damaged spots.

And what part does Elmiron play in this? Well due to the fact that Elmiron is pentosan polysulfate sodium, it attaches to the bladder wall and protects damaged areas of the bladder wall from any potential outside threats. Think of Elmiron as a band-aid – but a band-aid that we later found out can damage your vision completely to the point it’s irreparable – so, actually, it’s not really a great band-aid after all.

Approved by the FDA in 1996, Elmiron was thought to be an answer for those who suffered from interstitial cystitis.

It wasn’t until 2018 that the effect on a user’s vision was discovered. On March 26th, 2020, the first lawsuit against Elmiron was filed in response to the eye damage caused – the plaintiff in the case allegedly suffered a loss of vision.

Here’s a breakdown of the case:

• The claim is that the manufacturer of Elmiron did not warn users or the medical community about any potential dangers that were now found to be associated with their product. It also alleges that they chose to withhold information from clinical trials in regards to dangers as well as the fact that they failed to take Elmiron off the market once they were aware of the problems.

At the time of this blog post, Elmiron is still available for use in the United States.

Unfortunately, it doesn’t stop there. There is also now knowledge that links Elmiron to maculopathy, which is a disease of the macula region in the eye. The macula itself is responsible for the type of vision we have in the center of our field of vision. Maculopathy is one of the most common reasons that blindness occurs in humans.

But wait, it gets worse. As if everything that was said wasn’t incredibly horrible, one final piece of information may push you over the top altogether. There is also evidence that a few of the clinical trials performed for Elmiron – way before it was brought to market, shown in large part, that there was a possibility of eye damage. With that said, it wouldn’t be the first time we saw a company throw their morality and empathy to the side to line their pockets with more money. It may be time to look for an alternative to Elmiron, as new tests have found it to cause blindness in users.

What Symptoms Should I Look Out For?

Great question. Here’s a list of all of the conditions that were found to be caused by Elmiron:

Filing a lawsuit against a pharmaceutical company can be tiring and these Elmiron trials are still quite new, so we do not know many of the granular details. Marcari, Russotto, Spencer & Balaban are experienced in mass tort matters. Call (855) 435-7247 or sign up using the form at the bottom of this blog post for a free consultation today.

If you or a loved one has been hurt by Elmiron and has developed either macular degeneration or pigmentary maculopathy, please use the form below to sign up for a free consultation with our law firm.

We thoroughly investigate the circumstances of your exposure and aggressively pursue the maximum compensation possible for your injuries. Call us today at (855) 435-7247 or contact us online to schedule a free consultation.

You can also contact us by filling out the form below. Once you’ve filled it out, and we’ve received it, we will make sure to reach out to you as soon as we possibly can. We look forward to hearing from you!