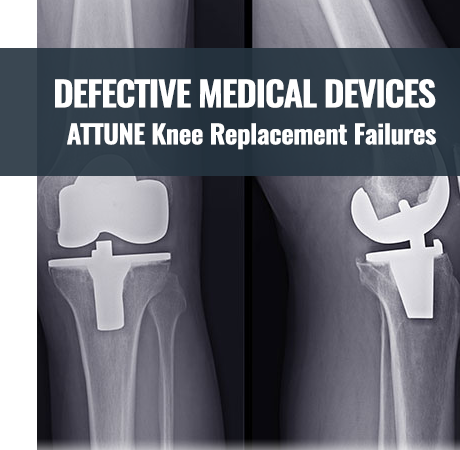 In the United States, if someone is facing mobility issues, a common course of action is to undergo orthopedic surgery, with knee replacements being one of the more regularly conducted procedures. This particular type of surgery involves the removal of part of the bone in the joint and a device being implanted into the knee that while artificial, acts as a functional body part.

Typically, knee replacements are thought to last for anywhere from ten to twenty years, but recently, the ATTUNE Knee System has caused many individuals to suffer from premature failures, which leaves them in need of painful revision surgeries. If you, or someone you love has received an ATTUNE Knee System that ultimately failed, Marcari, Russotto, Spencer and Balaban’s team of mass tort attorneys is prepared to fight for not only justice, but also the full financial compensation that you may be entitled to. We’re constantly pushing ourselves to be aggressive in our litigation when it comes to representing the victims of these devices, as we fully understand how traumatic it can be to deal with these unfortunate consequences.

How Can I Know if my ATTUNE Knee Replacement is Problematic?

The FDA has been receiving a constant stream of negative reviews and reports in regards to the horrific side effects that patients have seen after having an ATTUNE Knee Replacement device implanted into their body. Unfortunately, there are an estimated 600,000 knee surgeries that take place every year in the U.S., so the amount of people who are suffering is terribly high.

ATTUNE Knee Replacements can cause several key issues upon prematurely failing, such as:

As sad as it is, when someone is going through these issues, the normal course of action is for them to have a second surgery to remove the defective device, and replace it with another.

How do I Know if I am Eligible for Financial Compensation?

If you, or someone you love has had a knee replacement surgery within the last decade, and has experienced a failure requiring another knee surgery, please contact us today. You may be entitled to financial compensation for the following:

Marcari, Russotto, Spencer and Balaban will proudly represent any individuals that have been the victim of a faulty ATTUNE Knee Replacement device, all across the Carolinas and Virginia. Call us toll free today at (855) 435-7247, or contact Marcari, Russotto, Spencer and Balaban online to schedule your free consultation. Our firm works on a contingency fee basis, meaning that until your case is resolved, and you’ve received your financial compensation, you don’t have to pay legal fees.